The pictures are here!!!

Posted on September 18, 2010 by joelgranados

A couple of weeks ago I received a zip file that contained pictures taken in the arctic.  They were very neatly organized in dated folders.  I received pictures from two cameras.  One of them was intended to test a special InfraRed filter (IR).  The other was used to test the usefulness of the cmucam3 camera for our specific purposes.  I will refer to the second batch of pictures.  The InfraRed filter pictures I have not analyzed yet.

Lars (Our friendly biologists :) separated the pictures into different distance groups.  There were three: 100cm, 70cm and 40cm.  He chose two plots to take pictures of.  Each time he photographed a plot, he took 6 pictures (two of each distance).  He did a really good job at tagging the images.

We were looking at how the camera behaves in terms of focus, resolution and general survivability.  I was told that the cameras did well in terms of battery life and they basically worked as they were supposed to.  I also received feedback in terms of camera usability.  There were three comments that I want to highlight: 1. It is difficult to focus the pictures without an image feedback, 2. Sometimes the pictures did not take, 3. The resolution is very low to do any kind of annotations.  I have already added these comments to the issues in the project page.  There I have possible solutions for each issue.

his is the picture taken from 100cm.  One can barely notice anything.  There are also some black regions and red and white pixels that are probably some sort of issue in the imager.  Also notice that, while one cannot differentiate details, one can detect  patches of activity.  From this picture one could have an informed guess as to where the flowers might or might not be located.  Patches of gray might indicate that there is no vegetation activity.  Of course this depends on the type of flower we are studying.  But my point is that this picture gives information!  Also notice that one can see the plot separators in this image.

In the picture on the right the image gets a bit closer.  Its taken from a height of 70cm. Not a lot of detail is revealed to use, compared to the previous image.  We can see that the plot separator is more noticeable.  We can’t see the others because the picture is taken close to the plot.  We do however start to notice some shapes.  We recognize the bigger leaves in the top right and in the bottom left of the image.  As with the previous image, we can also see a bunch of red pixels, don’t really know where they come from. 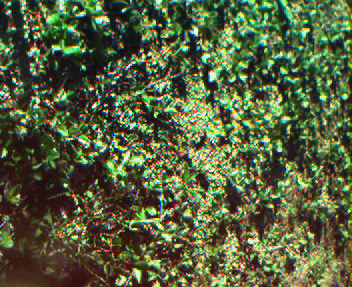 The image on the left is taken from a height of 30cm.  In this one we can make out some leaves and some stems running along the ground.  We can’t, however, make out any flowers.  Notice also that there are red pixels sprinkled all over the place.

The general feeling is that the resolution is way to low to do any kind of detecting or annotating.  Seeing these pictures I have to agree.  I cannot see how we can directly detect the flowers from these pictures. But we can use these imagers as the first line of detection.  They can tell us where the flowers are and we can point the other more powerful imagers in that particular direction.  In general I don’t want to dismiss these cameras just yet.

I’m working on a new camera that will have double the resolution.  Hopefully this will get us to a point were we can see some flowers.

I'm fascinated with how technology and science impact our reality and am drawn to leverage them in order to increase the potential of human activity.
View all posts by joelgranados →
This entry was posted in PhD, wireless image sensor networks. Bookmark the permalink.