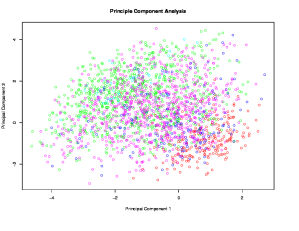 I ran Principal Component Analysis (PCA) on the hog features that I calculating (Using Navneet Dalal’s code) and the result was not spectacular.  I plotted the result and color coded the types of flowers (bud:red, female:green, unknownSex:blue, hair:cyan, male:magenta).  The figure suggests that the buds are easily differentiable from the rest since they are nicely grouped to one side.  It also elucidates the lack of hair types (we don’t see much cyan).  As could be expected the unknown type is all over the place.  And finally we have the male and female somewhere spread out in the middle of the figure.  I was expecting a bit more separation between male and female types.

Knowing that the neural network and/or the Support Vector Machine that I’ll use to classify the images could have good behavior despite the PCA results I have some observations that might be relevant as we move forward.  These observations can produce some changes in the way we do the annotations.

These are all things that I believe are or might happen.  This post serves as documentation for further reference.

I'm fascinated with how technology and science impact our reality and am drawn to leverage them in order to increase the potential of human activity.
View all posts by joelgranados →
This entry was posted in annotation, PhD. Bookmark the permalink.